Last night I spent the night at the hospital. Like the night before when D had stayed, Emmett had a pretty long night of just general fussiness. The good news is, he’s having way fewer events than he has lately. But that reflux is just brutal. He spent pretty much the entire night grunting, punctuated by the occasional crying spells. So I didn’t sleep well and was up a lot. It was kind of like … having a newborn.

This morning, after a quick attempt at breastfeeding (still not really getting it), I left the hospital to meet D at the pool for Theo’s swim lessons. Since I was running late, I decided to pump on the way, something I’ve done many times. I’ve mastered the art of pumping and driving. I have a hands-free setup, so I simply get everything situated before I start the car, and then unhook once I get to my destination. I usually wrap a cardigan around myself so it’s not so obvious to the cars next to me. Well, I may have been driving a little fast, trying to make it to the pool on time (I bet you can guess where this is going). Yeah. I got pulled over. While pumping.

I had a moment of panic when I saw the lights. Although a cardigan is sufficient cover from drivers in the lane next to me who probably aren’t looking too hard into my windows, the thin, semi-sheer fabric didn’t exactly hide the outline of my pumping shields. Or the noise of the pump, for that matter. So much awkward. Thankfully, I think it was even more awkward for the police officer, who quickly let me off with a warning. I think he wanted to get out of there even faster than I did.

I had a good day with Theo, watching him swim, and then meeting up with some friends with kids his age for lunch and play time. Then I had to rush back to the hospital (once again pumping in the car, but this time paying close attention to the speed limit!), so I could meet the doctor for E’s frenectomy (tongue tie clip). I was nervous about the procedure, but it ended up being very quick and he hardly cried at all. The eye exams were 100 times worse. They immediately put him on me afterward to nurse — both for comfort and because they want him extending his tongue as much as he can right away. It went a little better than this morning’s session. He’s still kind of a lazy nurser (which will hopefully improve with practice and maturity), but I could already tell his latch was improved, so I’m hoping we continue to make forward progress.

He’s still hanging out on the oxygen tank at 1/32 liter and hardly having any events (knock on all the wood). He got a bath this evening — first time in the sink — and did pretty well. Weight was up 58 grams, bringing him to 5 lbs 15 oz. He very well may crack 6 lbs tomorrow! 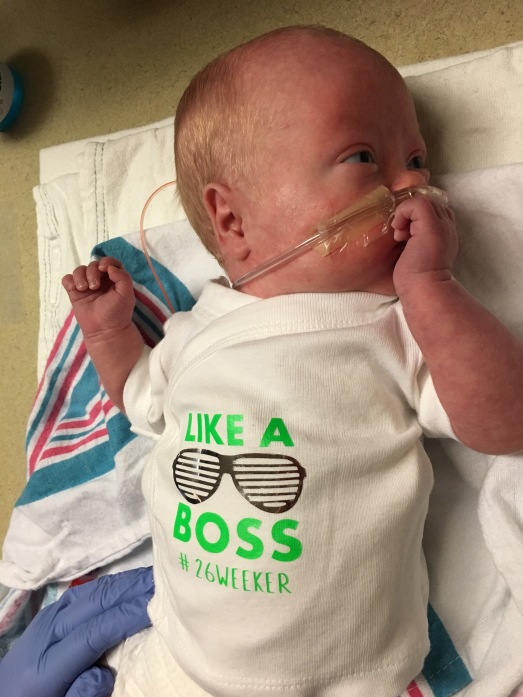