This week I made quite a bit of progress on the nursery. I painted a dresser, spray painted two lamps, and started making a mobile for above the crib. Also, somewhat non-baby related, we bought a new mattress set! It will be delivered on Thursday and I am beyond excited. Here’s hoping a nice new mattress helps my achy back. But if nothing else, it will be nice to have more room to spread out (we are upgrading from a queen to a king size), especially since my body pillow takes up quite a bit of space!

Oh, and in other exciting news, I think we may have found our daycare! I mentioned last week that the search was stressing me out, and that we weren’t crazy about the Kindercare we had toured. Well, we went and saw the home daycare I mentioned last week, and we really liked it a lot. We spent a little over an hour talking to the owner/primary caregiver, and we both felt really at ease with her. She seemed very thorough and experienced, and I liked that she talked our ears off while we were there. Made me feel like she’d be very good about communicating what was going on with our son all day while he’s in her care. He’d be the only infant there, which has its pros and cons, but I think is mostly a plus. It’s too bad he won’t have any other little “friends” to play with, but he’ll also get to be held a lot, as she likes to integrate the infants with the older kids whenever possible. So whatever the other kids are doing, she’ll basically be holding him so he’s around them. There is also a secondary caregiver (her husband), so one of them can stay with the baby while he naps, and the other is attending to the other kids. I think a lot of the daycare search is about a gut feeling, and we both just had a good gut feeling about this. I’m going in tomorrow morning to observe what a typical morning looks like (we spoke with her at the end of the day so she could devote her full attention to us). Barring any strange practices or unforeseen circumstances, I think we’ll be ready to make an official decision and put down our deposit. She only has one space left and has another family coming to look later this week, so we’ll probably cancel our other two tours we have set up for next week and call our search done. It’s too bad we have to make a decision so quickly, but like I said, I feel good about this place. The only downside is the location, as it’ll add about a half our to our commutes, but we have our eye on a super conveniently-located preschool that takes kids at 1 year and up, so we’ll probably make the switch after he turns a year anyway.

With that long intro out of the way, here’s what’s happening with baby and me at 26 weeks…

Baby is now about 14 inches long and almost two pounds. Wow! His hearing should be developing more this week, and he’s both inhaling and exhaling amniotic fluid in order to prep his lungs for breathing on the outside. It’s such a strange thought that they breathe in fluid but don’t drown. Little things like that make you realize what a miracle this process really is. He’s kicking like crazy, and the other night I got to watch him put on quite a show. My belly was bouncing all around like it had a mind of its own… and I guess technically it does. Funny, one of the blogs/pregnancy calendars I follow notes that the earlier butterfly kicks have been “replaced by something akin to a rabid mongoose flippin’ out inside a burlap sack.” Hahaha… I’m not sure if mine are that bad (maybe thanks to the anterior placenta?) but it’s a funny visual, and some days it does feel like he is in there doing gangnam style or something.

Mama is still dealing with the sciatic pain. It seems to be worse after I’ve been really active during the day (you know, doing things like painting dressers and spray painting lamps??). My mom offered to loan me her exercise ball to sit on at work, and I think I may need to book myself a massage sooner than later. D and I went to a movie last night and I just could not get comfortable, and spent the whole movie squirming and readjusting, trying to alleviate the sciatia. (On a side note, go see Silver Linings Playbook if you haven’t already. Jennifer Lawrence certainly earned her Oscar nomination, and Bradley Cooper is always nice to look at too.) But other than the sciatic pain, I’m feeling pretty good… that is, if you don’t count barfing this morning after I fed the dogs. It’s strange how the morning sickness creeps back in every now and then briefly, even at almost 6 months pregnant. Weight gain this week was .6 lbs. for a total now of 13.2 lbs.

I snapped a picture yesterday just before yoga class and can’t believe how big I’m getting. Crazy to compare the same outfit at 19 weeks and 13 weeks. The funniest part is, at the time I took each of those pictures, I remember thinking how huge I looked then. I find that laughable now, which makes me wonder if I’ll be looking back at this picture in 6-7 weeks thinking about how tiny I looked?? Yikes! 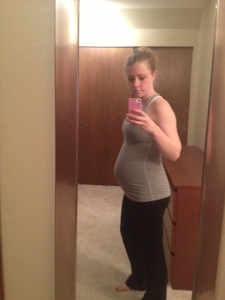