Well, we weren’t supposed to have our first ultrasound until the 28th. But a brief scare Sunday night led to an early look at our baby Monday morning. First things first, baby is fine! Measuring 3 days smaller than I thought it should (6 weeks 5 days, instead of 7 weeks 1 day), but the nurse practitioner said their equipment has  a margin of error of +/-4 days, so she wasn’t worried. The best part was we got to see a heartbeat! We never got to see that last time. The nurse estimated it was probably beating around 140-160 beats per minute, which is right where it should be. 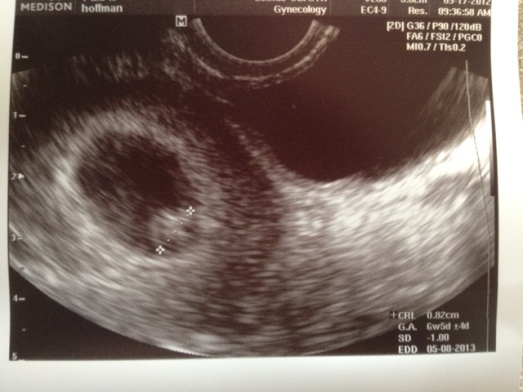 So, the back story:

Sunday night, just before bed, I noticed a small amount of blood. It wasn’t a lot, but it was enough for me to freak the eff out. I know some spotting can be totally normal, but I also know it can be the first sign of something wrong. Since I had a small amount of spotting with my last pregnancy, I was really scared. I cried myself to sleep, tossed and turned all night, and was wide awake super early the next morning.

I called the doctor as soon as they opened, and they agreed to see us at 9:50 that morning. I was so nervous sitting in the waiting room, and then again sitting in the exam room waiting for the nurse practitioner. It seemed to take forever. As soon as I saw the heartbeat flicker, I instantly started hyperventilating. I was relieved, shocked and just a whole bunch of other emotions all at once. The NP had to remind me to breathe, and said that everything looked exactly as it should. No idea where the bleeding had come from, but it had stopped by that point anyway. She told me that a little bit of bleeding wasn’t anything to be worried about, but that she also understood how scary pregnancy can be after a miscarriage, and that if at any time I didn’t feel comfortable with something I could always come in to be checked out. I have to say, I am really liking my new doctor’s office so far. So, I get to go back in on the 28th for my normally scheduled appointment. As scared as I was for the bleeding episode I’m glad we got a sneak peek at the baby, and that I only have to wait 10 more days to see our baby again.

With that long intro out of the way, here’s what’s happening at 7 weeks…

Baby has doubled in size since last week and is now about the size of a blueberry. The big news this week is that baby is growing hands and feet, though they look more like paddles at this point. The tail is rapidly disappearing, making the baby look even more human than last week.

Mama is feeling pretty much the same, physically: tired, nauseated, bloated occasional headaches. The only new thing this week really was the bleeding. Emotionally, I think I’m finally starting to feel a little more excited, after seeing the baby’s heartbeat. D didn’t seem very reassured by the ultrasound and says he’s still scared. Maybe it’s because we’re only about 7 weeks along, and that’s the point where our baby died last time, discovered at 8 weeks. If we can get past this 8 week ultrasound (which will actually end up being closer to 9 weeks), maybe then he’ll start to feel a little more confident. I’m definitely ready to start getting excited about this pregnancy and really look forward to the day D is too.