Today was pretty eventful. Normally, in the NICU world that would be a bad thing, but today it was mostly good.

This morning, we got the news that the doctor would like to take Emmett off the NIV NAVA machine. His team had been discussing this idea for a couple days now, and they decided today was the day. But instead of going to a high-flow cannula like they talked about, they decided to go to a CPAP. While both options prevent his lungs from collapsing with exhale by keeping them partially inflated at all times, with the CPAP you can actually control and measure the amount of pressure, so the doctor felt this was a good intermediate step on the way to a high-flow cannula. Unfortunately, that meant putting him back on the snorkel mask he had hated so much when he was two days old.

So far he seems to be tolerating it well, though the machine is noisy and his face is almost completely covered. It’s hard because even though we know it’s a step forward (the respiratory therapist called this “remarkable” for his gestational age), it feels like a step back, simply because it’s so much more obtrusive. With any luck, he’ll only spend a brief amount of time on the CPAP before graduating to high-flow cannula — which looks almost exactly like what he had before, but offers even more independence and less support. With both the CPAP and the high-flow cannula, there’s no backup mode if he stops breathing, which is a big, scary step. Now, if he has an apneic episode, the assumption is that he’ll recover on his own and start breathing again. If for some reason he doesn’t, then the nurses have to rush in and help him. And that’s terrifying. But the way the doctor described it, he needs to eventually do this on his own, and the only way to see if he can is to try. If he has too many apneic episodes and/or his oxygen saturation drops too often, there’s always the option to put him back on the NIV NAVA. Two steps forward, one step back, right?

I didn’t get to hold him today because he was pretty exhausted from the transition, so that was disappointing. But he’s only had a couple events since getting the CPAP and they were self-resolved, so we’re optimistic this was the right move to make at this time.

On the bright side, he got to spend a few minutes without anything on his face before he got the CPAP and I was able to get a video of him breathing completely on his own and looking around. The nurses always comment on how alert he is for a 29 weeker, and how big his eyes are. They always tell us how cute he is too. They probably say that to all the parents, but we think he is pretty cute — especially as he fills out more and starts looking more like a newborn. He gained another 60 grams today and is up to 2 lbs 9 oz now! 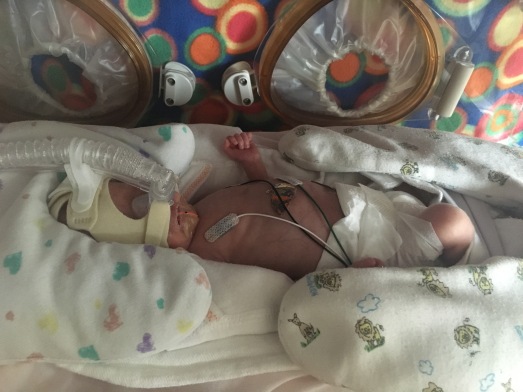