I suck. We’re getting ready for Theo’s second birthday and the last time I posted was just after his first birthday. I actually have several posts I had started drafting, but just never got around to finishing. Maybe I’ll dust those off at some point too.

So, this is my attempt at resurrecting this blog. I hope I can be more diligent about writing because life really does go so fast and I want to preserve these memories. I still can’t believe I almost have a two year-old. Life with a two year-old is pretty much everything I thought it would be — the extreme highs when he’s being sweet, coupled with the extreme frustration when he’s throwing one of his epic tantrums. And good lord, are they epic. Just this morning he was going to help me feed the dogs (something he loves to do), but when I gave him the cup full of dog food, instead of going toward the dogs, he ran the other way. Some kind of a game, I guess? I gave him a few chances to come over to the dog dishes (all the while, the dogs are drooling larger and larger puddles), before I finally went to him and told him he could go put the food in the dish, or I was going to do it myself.

Long story short, he chose poorly. I took the food from him. He lost it.

I was already late for work, and he was so mad by this point that he didn’t want to let me brush his teeth, put on his shoes or jacket — or even touch him, really. He threw himself on the ground kicking and screaming (so dramatic). Getting him ready was quite the fight, and by the time I hauled him out to the car, he was screaming so loud I was sure our neighbors were going to call the police because some kid must be getting kidnapped or possibly mauled by a bear. When he screams, this kid screams like he’s being tortured.

But even through the frustration, sometimes all I can do is laugh. I mean, this is what I signed up for, right?

And the sweet moments make up for it. Like the way he says “I love you,” (which sounds more like “ah duh doo”) when I put him to bed at night, and he blows me kisses all the way to the door — even after I close the door, I can still hear him blowing kisses. Or the way he points and yells, “mama!” when I walk in the door and runs so fast he crashes into me in a giant hug.

Life with a toddler is tough, but it’s worth it.

Here are some pictures from the past year. 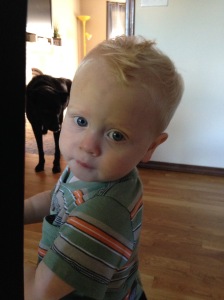 A day at the aquarium. 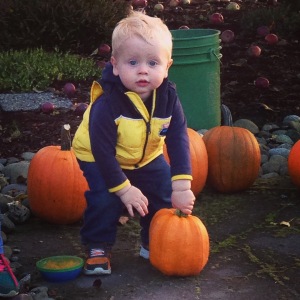 Picking pumpkins at the farm. 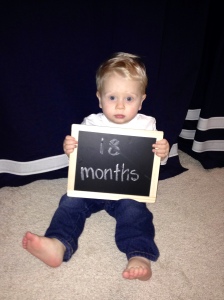 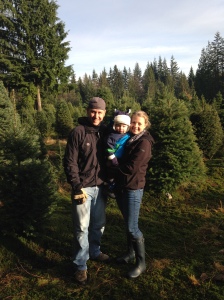 Getting our Christmas tree. 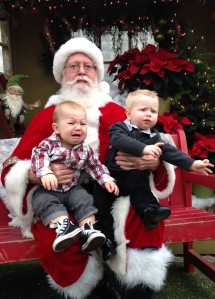 Theo and cousin Ryder weren’t a fan of Santa.

Cheering on the Seahawks!

Hangin’ with Ryder at the library.

Ready to mow the lawn.