Hello? Is this thing on?

We’ve been home now for about a week and a half and things are going well. I’ve had a lot of people tell me they miss the daily Emmett posts so I thought I’d give a quick update on how things are going. I definitely don’t plan to blog every day again — there just really isn’t enough to talk about — but I do hope to keep writing regularly to capture memories, much like I did before Emmett came along.

Unlike in the NICU where things were constantly changing, life back at home is moving much more slowly and we’re settling into a busy but blissfully mundane routine. Our days and nights are filled with normal newborn stuff: Getting stuck under a sleeping baby while watching entirely too much HGTV. Getting peed on in the middle of the night because we were too slow with getting a new diaper on in our groggy state (rookie mistake!). Bouncing, rocking, swaying, shushing while trying to figure out what the heck it takes to get McScreamy back to sleep at 3 a.m. In just over a week, Emmett has suddenly become less like a sick patient and more like a typical newborn and I feel like we’re getting to know him all over again outside the rigid hospital setting, where everything is strictly measured and timed. While we’re trying to maintain some semblance of the routine already set in place, we’re following his lead more and letting him sleep and eat according to his cues and our needs.

Feeding continues to be a challenge for us. He takes a bottle pretty well now, but he seems to be getting worse, not better, at breastfeeding. When we left the hospital, his latch was good, but he simply lacked the stamina to nurse effectively for every feed. We were instructed to give him four bottles of expressed breastmilk per day, each fortified with a scoop of Neosure powder for extra calories, and were given the all-clear to nurse at his other feedings. With him eating an average of eight times per day, it meant we were doing about 50/50 nursing and bottles. We’ve had two weight checks with the pediatrician since, and while he’s gaining, he isn’t gaining as rapidly as he should, so we were recently instructed to bump it up to six “protein shakes” per day, which only leaves about two feedings to practice breastfeeding. His stamina is better, but all the bottle feedings have spoiled his good latch and he gets frustrated easily at the breast. We’re going to see a lactation specialist this week to see how we can improve our nursing sessions so we can hopefully start doing more nursing and fewer bottles. Trying to bottle feed and then pump with almost every feeding is pretty time-consuming. Not to mention our neverending dishes thanks to all the bottle and pump parts. D has been taking most of the middle of the night feeds so I can pump while he gives a bottle and we can both get back to sleep as fast as possible.

Theo has been amazing. I know we’re less than two weeks in and that this is probably the honeymoon phase, but seeing Theo’s nurturing side come out is probably my favorite part of having two kids. He loves to kiss and hug baby Emmett, and has been so gentle. He is also very proud of “his baby” and loves to introduce him to everyone. I’m handling taking care of two kids better than I thought I would too. We pulled T from daycare while I’m home on maternity leave to minimize the germ exposure to E while he’s so small. And while I had visions of chaos — either neglecting a screaming baby while tending to a needy toddler, or ignoring my firstborn while an infant consumes all my energy and attention — so far things have been going pretty well. Theo is usually happy to entertain himself while I’m dealing with Emmett, and even likes to help by grabbing my water or my phone for me if I’m stuck nursing E on the couch. He’s gotten pretty good at fetching himself a snack and he knows how to operate Netflix on his own (not sure if that’s more of a brag or a confession!). On more than one occasion I’ve let him crawl in bed with me in the mornings where he’ll play quietly on the iPad while I catch a few more Zs after being up with the baby most of the night. I’m not winning any mother of the year awards but everyone is clean, fed and happy. I’ll call that a win.

Overall things are going well. I’m insanely tired, but I’m happy. I touched on this on my last post, but it really is amazing how long ago the NICU feels already. With all the typical newborn stuff we’re immersed in, it’s almost easy to forget that he’s not in fact, a newborn. He’s a three month-old, who spent a quarter of his first year in the hospital. It feels like years ago, not weeks ago. And while I still haven’t figured out how to gracefully answer the “how old is he?” question while out in public, life just feels normal right now. And that’s a pretty big deal. 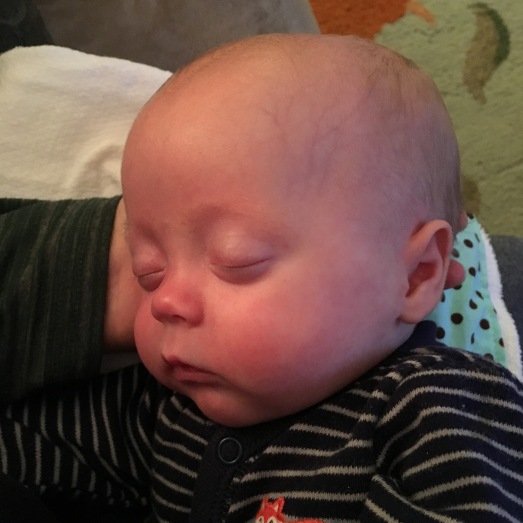 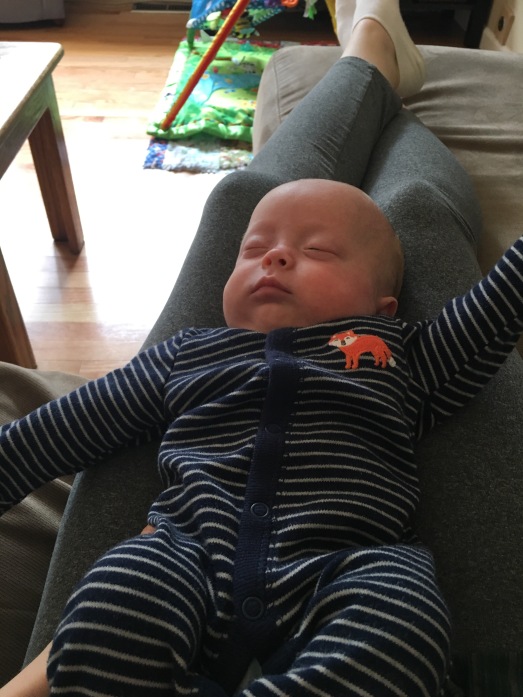 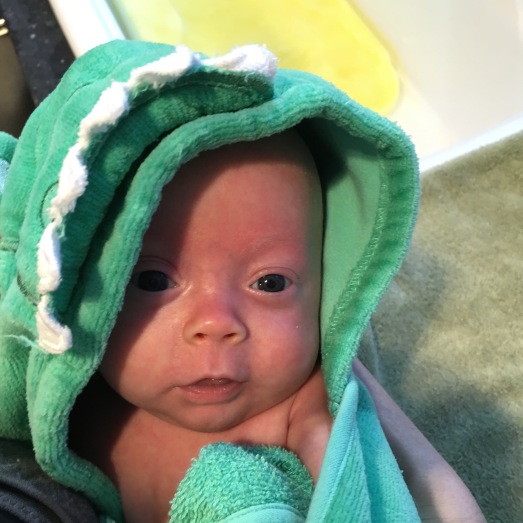