After a highly emotional day yesterday and facing the possibility that E could need g-tube surgery, I arrived this morning to find out the nurse had tried a bottle on him and that he ate half his feeding! I was very surprised, considering the physical therapist yesterday thought a bottle would just overwhelm him and cause him to shut down. I was initially a little apprehensive about what introducing a bottle might mean for breastfeeding, but to go from thinking he might need surgery to realizing he probably won’t really put things in perspective and I’m kind of at peace with whatever happens as long as he doesn’t need surgery.

That said, we tried breastfeeding later today and he actually did better than before. I talked to the lactation nurse and she said while the conventional wisdom is that introducing a bottle before breastfeeding is established can sabotage breastfeeding, sometimes it’s just the opposite in preemies, and that giving a bottle can sort of kick start their understanding that sucking can result in food. E did so well with nursing today that we’ve decided to start up the weighted feeds again so they can measure just how much he’s getting via breast. Our plan going forward is to give a bottle 1-2 times per day, breastfeed 1-2 times per day, and the rest will be via feeding tube. As he gets stronger we’ll start doing more breast and bottle and less via tube. What a 180 from yesterday.

Overall it’s been a very good day. Hardly any events, starting to figure out how to eat, and a healthy 54 gram weight gain tonight, bringing him to 6 lbs 7 oz. I really needed that today. 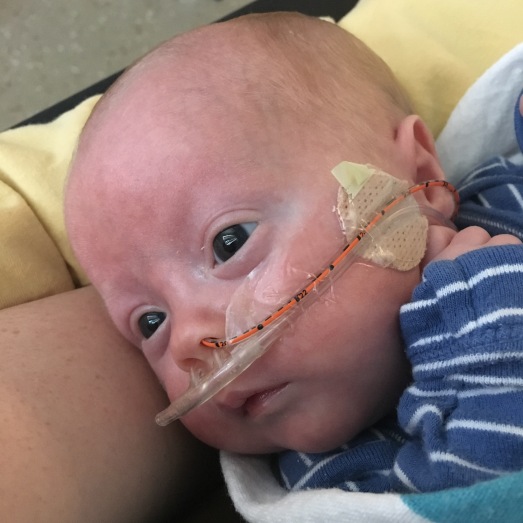