Today was relatively uneventful – a welcome change from the past couple days. Emmett is still having a higher number of episodes, but I think it’s only obvious in comparison to the good week he had last week. I still stare down the monitors, silently willing the numbers to go back up every time he has a brady or desat, but as scary as those events are, he always pulls out on his own.

Most notable events of the day: they turned his oxygen flow down to 3 liters (though he’s been hanging out around 24% to compensate) and he’s put on another 20 grams. He’s 1600 grams even currently, which still rounds out to around 3 lbs 8 oz. He pulled out his feeding tube yet again overnight. This time he at least had the sense to pull it out completely (all 17 cm) so it didn’t cause him any reactions. The nurse simply went in to start his feed this morning and his gavage was just laying beside him. Stinker. They are having to get creative in their taping tactics to keep it in place. I can only imagine this will become more of an issue the bigger, stronger and handsier he gets.

Kangaroo care went well today. He started out nuzzling but after a while he seemed uncomfortable and grunty so I pulled him upright into the traditional kangaroo position, and he passed out. It was hard to put him back, he seemed so content. It’s nice that he’s finally feeling sturdy enough that I’m comfortable repositioning him on my own without having to call a nurse in to help. What a difference from just a few weeks ago when it took two nurses just to pull him out of his isolette and put him on me! 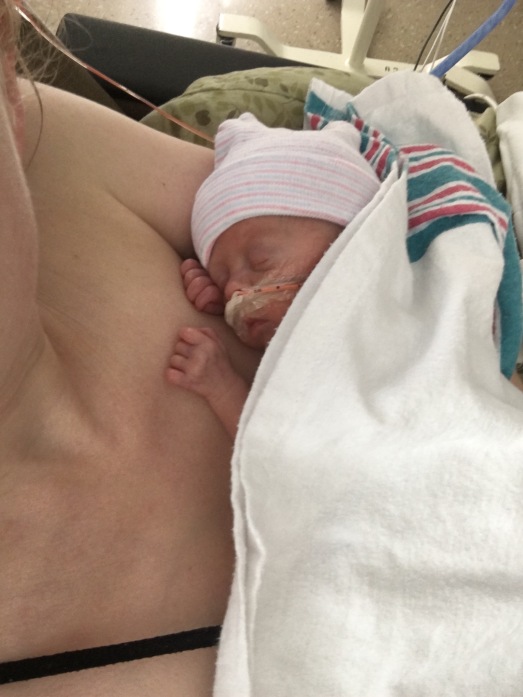 The face of contentment.