Today was a day of highs and lows. I woke up this morning to the news that Emmett would be having his eye exam at 8:30 to check for ROP (retinopathy of prematurity). I knew they would be checking for it soon, but hadn’t realized until this very morning that it was already scheduled. D quickly drove over from work so he could join us for the test. The ophthalmologist warned us that for a baby born as early as he was, it was very likely he would have it to some degree. They rank it in severity from stage 1 to stage 5, and the doctor said we were hoping it was below stage 3. Then he explained how he would conduct the test. My stomach churned, hearing him describe how they would peel his eyelids open and us an instrument to move his eyeballs around so he could get a good look at all sides. The nurse suggested we not watch and we happily obliged. So we mentally braced ourselves — both for the test itself and the results. I’m glad we didn’t watch, because the sounds Emmett made brought me to tears. Thankfully it was over quickly, and the ophthalmologist informed us that he was stage… ZERO! No signs of ROP, which is pretty amazing. He isn’t out of the woods yet (it can present itself later) and we’ll have to repeat this awful test every couple weeks until he’s close to full-term, but what a relief!

Having E pass his ROP test with flying colors made me insanely happy. I’m so proud of him. I don’t want to jinx anything but we keep passing all the scary stuff (brain bleeds, ROP) and now he really just needs to gain weight and all his bradys and desats should work themselves out. And – he was up another 43 grams tonight, bringing him to 3 lbs 4 oz. Like I’ve mentioned before, his “wimpy white boy” status and early gestation don’t seem to be holding him back either. He just keeps defying all odds. The neonatologist stopped by shortly after the eye exam and reiterated how great he’s doing and said if he keeps up the good work, we’ll drop him down to 3 liters of flow this weekend, and by next week he could be down to 2, which would allow him to try breastfeeding if he’s ready! After our chat, she basically told us not to bother coming to rounds because that’s about all there is to say about him at this point. Really can’t ask for much more than a boring patient in the NICU.

I warned you that this was a day of highs and lows, so here’s where it gets low. The ROP test completely wiped him out and he had a major increase in bradys and desats today. The nurse said that was to be expected, but it was still really disheartening. He’s had a bad streak the past few days anyway, and this test just kind of put him over the top. His poor eyes were all red and puffy from the exam, and even kangaroo time wasn’t very calming for him today. We started out in the nuzzling hold but he just couldn’t seem to get comfortable and his heart rate was skyrocketing from all the fussing he was doing. He wasn’t doing any nuzzling this time anyway, so after about an hour of failing to make him comfortable, I had the nurse help me reposition him so he was upright in the traditional kangaroo hold to see if that helped. It helped some, and he did eventually calm down. But then shortly after we put him back, the RT came in to change him to a different high-flow machine and the machine made a really loud sound and scared him into three brady-desats in a row. It scared the crap out of me and even the RT was very apologetic and said he didn’t think he’d react like that. I think it was all just too much for him.

D went back to the hospital after dinner and thankfully said he seems to be doing better this evening. I’m hoping we’re past the recovery period for the eye test and he’s on his way back to normal. Really dreading having to repeat this every two weeks. I know things could be much worse — and like I said earlier, he’s really doing amazing. It’s just so hard to see him uncomfortable and not be able to do anything to help him. It was just a really draining day. 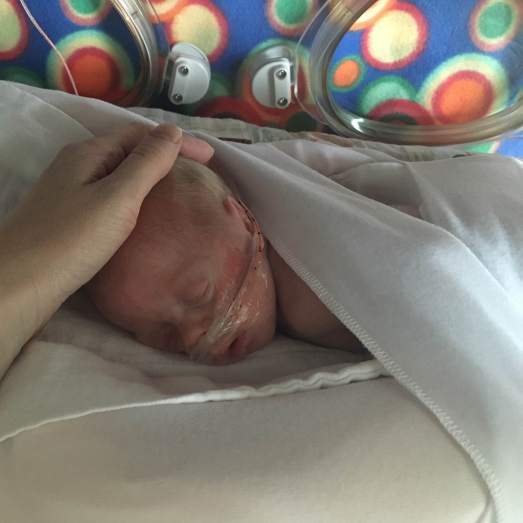