We had another good day today. Emmett is still doing great on the high-flow cannula. With him doing so well, it would be reasonable to start the process of weaning the liters of pressure (he’s currently at six). But the doctor said he’d rather not push him right now and just let him be. If we were to start weaning him, there’s every chance he’d handle it well from a breathing perspective, but may have to work harder, which could slow his weight gain. They may wean him down to five liters as soon as tomorrow.

During his checkup this morning, the doctor could still hear his heart murmur, but that’s actually a good thing. While we have every hope the murmur will resolve itself eventually, if we were to suddenly not be able to hear it, that could actually indicate the hole is getting bigger. The doctor compared it to a garden hose — if you make the opening smaller by putting your thumb over it, it’s louder. If you remove your thumb, the opening is bigger, and the water flows more freely and quietly. So for now, being able to hear the murmur is an indication the hole is still small.

This morning, in a small step toward breast/bottle feeding, I was able to take some milk on a syringe and drop it into his mouth as he was sucking on a pacifier. The idea is to get him to make the association between sucking and eating — something he hasn’t had since he’s been tube fed thus far. He loved it.

This evening at home, I came to the disappointing realization that I’m going to have to deal with excess lipase in my milk again. I discovered this when I was nursing Theo. You can read more that here, but in a nutshell, something like 3% of women (I always end up on the wrong side of statistics), produce too much lipase in their breastmilk — an enzyme that breaks down fat. The result is that the milk takes on a sour and soapy taste very quickly. And while most women can store milk in the refrigerator for four days or freeze it for up to six months, lipase milk goes “bad” much faster than that (the rate of breakdown varies by woman). I use “bad” in quotations because it isn’t harmful; it just tastes bad.

I was told by the lactation nurse a couple weeks ago that just because I had too much lipase last time, doesn’t necessarily mean I’ll have it again. And since Emmett is being tube fed right now, it doesn’t matter what it tastes like. But… since I’ve managed to build up a pretty impressive stash, and we’re just a few weeks away from being able to breast/bottle feed, I decided to test some of my milk tonight to find out if it was affected. Unfortunately, it smelled like soap. Damn. The only way to slow the breakdown when storing it is to scald it (bring it to just below boiling) and then cool it quickly, before freezing. You know, because I didn’t have enough on my plate right now.

So, this evening, I scalded the milk I pumped today and separated all my previously frozen milk. Any of the already frozen stuff we can use while he’s still being tube fed, we will. But anything I freeze going forward will have to be scalded first. After E graduates to normal feedings, I’ll just have to donate any remaining frozen milk from before I started scalding. I was able to do this after I discovered my lipase issue with Theo. And while it was painful to not be able to use all I had pumped, I was happy to be able to give it to a good cause, and that felt better than throwing out all that liquid gold. Milk banks give donated milk to NICUs, and ironically, the same milk bank I had signed up with last time is the one our NICU uses. So if I had been unable to produce milk this time, I would have been able to feed E donated milk from the very same milk bank I had donated to. Karma, right? 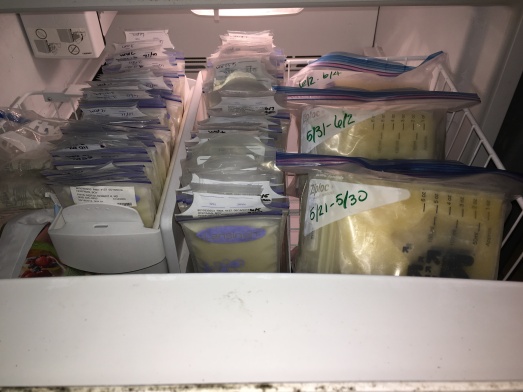