Another uneventful day. In fact, this morning E’s doctor actually said to me that he was one of her easiest patients. I asked two different nurses, plus the doctor, whether they were concerned with his lack of weight gain over the last two days, and they all had the same answer for me: no, that it’s the trend we’re looking for, and that changing his breathing support could be to blame as he adjusts. After hearing it three times I think I’m finally satisfied. I’ve become a little obsessed with his weight. Thankfully he was up 20 grams tonight at his weigh-in. He’s now 1150 grams, or 2 lbs 8.57 oz.

I stayed at the hospital last night, and then came home late morning and spent most of my day at home, getting T’s big boy room cleared out and painted while T was enjoying some grandparent time. Home improvement projects have always been my zen so it was nice to get away from the hospital, put on some Pandora and focus on a project. D and I went to Costco around noon (hot date!) and then he headed back to the hospital. Because of the way schedules worked out today, he held Emmett instead of me. He had a great afternoon with no episodes.

During cares this evening, D was able to snap a quick photo of E without the CPAP on his face. I’m hoping we can graduate to the high-flow cannula in a few days. It’s hard to argue with how well he’s been doing on CPAP – I just miss his face! It changes so much every time I see him. 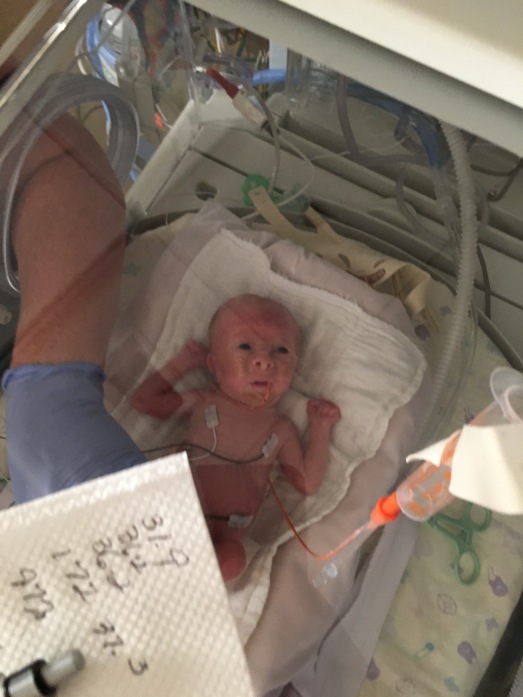