I’m not sure how to feel right now. I wanted this. I want this. We did this on purpose. But I’m scared out of my mind and the fear is overshadowing all other emotions at this point.

I found out last Wednesday. I took a test at 9 days past ovulation, thinking surely it would be too early to tell (the earliest I’ve ever gotten even the faintest line was 10 DPO). I hopped in the shower after taking the test, fully expecting a stark negative by the time I got out. Imagine my surprise when I discovered a faint, but very obvious second line staring back at me. I immediately started crying. Not out of joy this time, but out of terror. 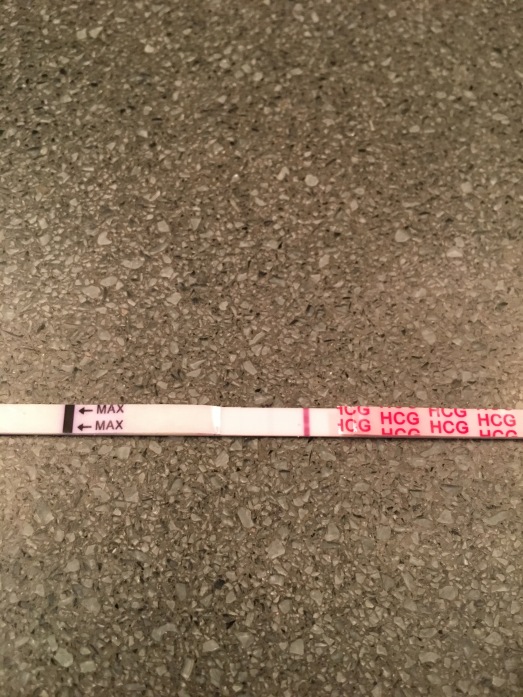 A faint second line… but a line, nonetheless.

Of course this would happen now. Just one week prior, I actually had my first appointment with a reproductive endocrinologist to look into our miscarriage history. I just wasn’t comfortable with the way my OB had essentially diagnosed me as having nothing wrong before even running any tests. Her reasoning was that most things that would cause repeat miscarriages would have affected our pregnancy with Theo. She did end up running a few tests, and everything came back clear, but I figured it couldn’t hurt to get a second opinion from someone whose specialty is getting — and keeping — people pregnant, versus an OBGYN whose focus is general women’s health issues.

The RE was very thorough in his assessment of our situation. He did agree that the fact we’ve carried a successful pregnancy to term was a very positive sign. But he didn’t agree with my OB’s assumption that a prior successful pregnancy meant there was nothing wrong. He was especially uneasy with our most recent loss since it was so late – he wasn’t ready to just blindly blame it on chromosomal abnormalities, which is the most common reason for miscarriage, and what my OB had assumed was the cause. There were also numerous tests outside the few my OB had run that he recommended looking into. He suggested we take a cycle off from trying and use the month of December to run a more thorough workup on both of us to see if they could pinpoint a reason for the losses. I explained to him that there was a chance I was already pregnant, and that I’d know in about a week. He said if that were the case, he’d monitor me closely throughout my first trimester and would run as many tests as he still could (not all the tests can be done if you’re pregnant already). I left the appointment feeling good. We had a plan. I was to call the second I either got a positive pregnancy test or started my period, as the timing of next steps was critical in both scenarios. In the meantime, I was given a prescription for a different kind of prenatal vitamin, another for extra folic acid, and I was instructed to take vitamins B6 and B12.

So on Thursday, after getting a positive home pregnancy test, I went in for my first blood draw. They were checking both my HCG and progesterone levels. HCG came back at 33, which is low, but I knew it would be low since I was only 10 days past ovulation at that point (i.e., 5 days before normal people who aren’t obsessed with peeing on tests so early would even know they were pregnant). The starting number isn’t important – but it’s supposed to double every 48 hours so the next draw would prove more critical. My progesterone was a little on the low side — 16.8, and they prefer it to be over 20. So they started me on progesterone supplements as well.

I had my second blood draw on Saturday (yesterday) and I’m happy to say my HCG was 91.4, so it’s more than doubled! I go back again on Monday for a third draw.

Also on Monday, I’ll be getting a comprehensive repeat loss panel done. I’m also going to be getting my first shot of Heparin. Even though my OB ran bloodwork for two of the most common blood clotting disorders, the RE wants to test for others, as a blood clotting disorder would both explain a later loss (a blood clot in the umbilical cord can be fatal to the baby), and could also explain why we escaped one healthy pregnancy unscathed (no blood clot during those 9 months = no problems). The RE said the tests can take 2-3 weeks to come back, and since those 2-3 weeks are some of the highest risk for miscarriage,  they’d rather put me on the Heparin injections now, and then take me off if all the bloodwork comes back clear. I’m not particularly looking forward to giving myself injections twice a day in the stomach, but if it means we get to take this baby home, I’ll do whatever it takes.