Welp, I procrastinated long enough that I’m just going to combine the 9 and 10 month updates. Thankfully, I’ve been pretty good about at least taking the photos on time. Theo turned 9 months old while we were in Hawaii last month, hence the beach towel photos. I’ll probably put together a separate post about our vacation, and things I learned traveling and flying with a baby for the first time, but in general, it was a really fun trip and we got some great photos.

Stats: 19 lbs. (16th percentile), 28.35 inches long (39th percentile). He eats great, but he is so active that he just burns everything off. I also have a feeling our short genes are starting to manifest themselves. Sorry, bud.

Milestones: We finally have teeth! Two bottom teeth popped up within about a week and a half of one another last month, and I think the top ones are starting to come in now, as he has been extra fussy and his gums have been swollen the last few days. Teething sucks! He had his first major fever last month, which was pretty scary. It got at high as 104.8 at one point. I called the doctor, who told me not to worry until it got over 105 (uhh… isn’t that close enough?!). She also said that how he was acting was a better indicator of how serious it was than the actual number. Aside from being a bit crankier than usual, he was still cruising around the house and getting into things like his usual mischievous self. Thankfully he got better after a couple days. He’s babbling a lot now but doesn’t seem to be assigning words to anything. He also blows raspberries and makes this funny popping sound with his mouth. Sort of a cross between a “p” sound, but nearly silent. It’s hard to explain, but funny. He climbs stairs like a champ and walks with a walker! I’m sure actual walking is just around the corner…

Sleeping: Sleep continues to improve. Every once in a while I have to get up once with him, but he’ll usually put himself back to sleep if he wakes, and most nights he sleeps from about 7:30 or 8 p.m. until 5 or 6 a.m. On weekdays we just get up at that time, and on weekends, we pull him into bed with us and he’ll usually let us get a few more hours. His favorite way to sleep? With his butt in the air. So cute.

Eating: He’s doing awesome with solid food and eats pretty much everything now, as long as it’s relatively soft. Sometimes he’s randomly picky about what he eats, but if you feed him something he knows he likes, he’ll eat and eat and eat forever. I swear the kid has a hollow leg. He’s showing less interest in nursing, which is both freeing and a bit sad. During the workweek I only nurse him briefly in the morning and at night before bed, and on the weekends, he’ll nurse maybe two other times. One thing he’s started doing lately is biting me when he isn’t interested in nursing. Especially now that he has teeth, that HUUUURTS. Not cool, buddy. I really wouldn’t be surprised if he self-weaned from nursing before a year, even though I am hoping to nurse for a year. I would even consider extended nursing beyond a year, just in the evenings maybe. But I have a feeling his lack of interest will dry up my supply here pretty soon. Our doctor doesn’t really want us to switch to cow’s milk before a year, but it also seems odd to introduce formula for just a month or so. I’ve got a nice freezer stash, so even if my supply tanks completely, we’ll at least have a couple weeks to talk to the doctor and decide what to do.

Likes/Dislikes: My little babyzilla loves knocking things down. He has these little stackable toys, and he will haul himself across the room to knock them over if he sees you stacking them. He’s also obsessed with opening drawers and cabinets, so we’ve had to install cabinet latches on everything. He’s developed some MAJOR separation anxiety lately and doesn’t like to be held by anyone he doesn’t know well. Heck, even if I leave the room and D is with him, he starts screaming. I’m flattered, but it’s exhausting to feel like I have to be joined to him at all times when I’m home. Despite his attachment to me, he isn’t much of a snuggler, except for the time he was really sick. He really does not like to sit still. Lately he’s developed a fascination with taking off his shoes, socks and pants. The first thing he does when we put him in his car seat is take off his shoes and socks. He’s even resorted to taking off other kids’ socks at daycare! He has also taken his pants off at daycare a few times. Thankfully he hasn’t started taking off other kids’ pants! Still loves bathtime – probably his favorite time of day, and mine too! He’s just so cute splashing around, babbling and playing with his toys. Although, just in the past week he’s pooped in the tub almost every night! Hopefully this doesn’t become a habit…

Mama: I got my first postpartum period last month. I’m grateful breastfeeding was able to keep it away for as long as it did, but all good things must come to an end, right? The return of my cycle has made me realize we could try another baby if we wanted to, but neither of us is ready for that quite yet! Maybe we’ll revisit the idea in 6 months to a year…

Okay, I’ll wrap this up with a few pictures from the last two months.

Who needs toys when you’ve got a beer box? 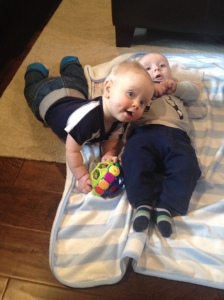 Watching the Superbowl with Cody. 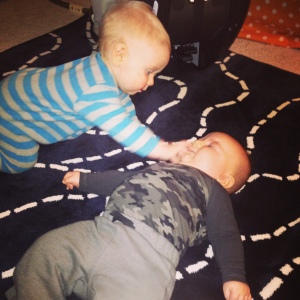 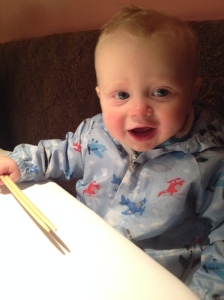