I can’t believe we almost have a six month-old. It sounds so old! But I am loving watching this little guy become his own person. Every day is something new. It’s funny how I used to think we had an easy baby. I definitely do NOT think he is an easy baby anymore. To the contrary, he is proving himself to be quite the little handful, but I still love him just the same. I think he is going to be very smart, inquisitive, and will probably be the type to test his boundaries, if I had to guess from his personality. He will be keeping us on our toes, for sure! 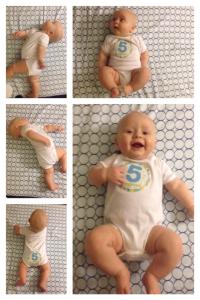 Stats: Somewhere around 16 lbs. It will be interesting to find out for sure in a few weeks when he has his 6 month checkup.

Sleeping: Ugh. Just… ugh. It’s getting progressively worse. I read a book last month called The No Cry Sleep Solution, as I had hoped to help him develop better sleep habits without letting him “cry it out.” I picked up a few good pointers in the book, but I think I’m moving on to a more aggressive approach, and I just downloaded Solve Your Child’s Sleep Programs by Richard Ferber on my Kindle. “Ferberizing,” as it’s commonly known, does require some crying, but I think it’s for the best, as it’ll teach him to self-soothe. I’m learning through reading, though, that it’s not quite as brutal as I initially thought. You don’t just ignore them and let them cry alone for hours on end. You go in at longer and longer intervals to assure them you’re there, without just resorting to picking up and nursing, which is the one surefire way to instantly calm him.

That’s the hardest part about this whole thing. It’s like, would I rather just give into him so I can get some sleep tonight? Or should I be strong, so I can get more sleep in the long run? I know the latter sounds like a no-brainer, but when it’s 3 a.m. and I’m exhausted and I’m up with him for the third time that night, and I have to get up in two and a half hours to put in a full day at work, it’s just so much easier to pull him onto the boob so I (and he) can fall back asleep.

One thing we did start doing a few nights ago, is we got rid of the Magic Sleep Suit. It was super helpful for the transition from the swaddle, but I think we reached a point where it was keeping him from putting himself back to sleep when he would stir, as it kept him in one position on his back. Think about it: when you wake up in the middle of the night, you probably change positions, roll over, and fall back asleep. Since he couldn’t get into any other position than starfish flat on his back, I think it made him fussier. I’ve noticed a slight difference since we got rid of the sleep suit … though I’m afraid to even type that out, for fear of jinxing it! But I’ll occasionally hear him whimper through the baby monitor and if I wait it out instead of going to him immediately, sometimes he’ll roll over and then fall asleep on his own.

Eating: Oh, one thing I forgot to mention in my previous paragraph, that I think may be affecting sleep, is the fact that he is definitely eating a lot at night. I previously thought he was nursing just for comfort, but I went out of town for a couple nights two weeks ago and D was on his own with Theo for the first time overnight, and Theo drank EIGHT bottles between 7 p.m. and 4 a.m.!! So clearly he is taking in a lot more calories at night than we previously thought (reverse cycling). To help this, I’ve been slowly increasing the amount I’m sending him in his bottles to daycare, in hopes of getting him a little more full during the day.

We also tried solid food for the first time last weekend! I was originally going to wait until he officially reached 6 months, but I figure any extra calories I can get into him during the day can only help. And he’s also been totally eyeballing our food whenever we eat, so he was ready. We’re starting with just one feeding per day of baby oatmeal cereal, and this coming weekend we’ll move on to pureed veggies. I picked up some carrots and avocado this weekend, and I’m planning to start making my own baby food. I’ve heard from some people that it’s better to start with veggies instead of fruit, so they don’t learn to only like sweets… and I’ve heard from other people that you should start with fruit instead of veggies because it’s an easier transition and is sweet like breastmilk. As with all things baby, there is SOOO much conflicting advice out there! So I figured carrots and avocados were a good compromise. They’re veggies, but they’re on the sweeter side of things (unlike broccoli, which can be a little bitter). We’ll see. So far he loves oatmeal, although more food ends up all over him, the floor, the dogs, etc. than in his mouth. But he’ll figure it out.

Likes/Dislikes: As I mentioned earlier, he is developing quite a personality, and is not shy about telling us what he likes and doesn’t like. Still loves bath time. Seriously, I’ve never seen him so happy as when he’s in the tub. It’s incredibly cute. He goes bonkers in his Jumparoo, and is starting to like tummy time a lot more, now that he can move. He isn’t crawling yet, but that’s coming very soon. He does pushups, rolls, inchworms and scoots around in circles. He’s also starting to get better about sitting up. I can balance him and he’ll stay for a few seconds before toppling over. He loves looking at any kind of screen, so we’re trying to be more careful about not letting him “watch” too much TV. This screen fascination has made middle of the night nursing a bit more difficult since looking at Facebook or playing Candy Crush on my phone was previously the only way I could stay awake. Now it’s often way too distracting for him, though, since he’ll pull off and crane his neck to look at my phone instead of nursing.

Mama: I’m down below my pre-baby weight. Hooray! I actually weigh less than I have in years, though my midsection still needs some work. I’ve had to give up running for the time being, simply because I haven’t had the time. I’m hoping to pick that up again soon. I’m still pumping at work, though I’ve had a few days where things have gotten busy and I either haven’t had time to do it as often as I should, or I just simply forget. I almost never get that “full” feeling anymore when I need to empty, like I used to. So it’s way too easy to go longer than I should between pumping if I’m not watching the clock. I’m trying to be better about this since I don’t want my supply to start dropping. I’m almost halfway to my goal of breastfeeding for a year.

Okay, that’s about it for now. Here are some pictures from the past month: 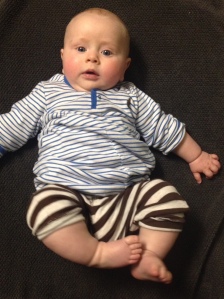 This is what happens when Daddy dresses him. Yes, that is a nightgown he is wearing as a shirt.

Doing pushups for his girlfriend Ava. 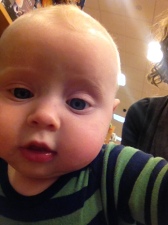 Mastering the art of the selfie. 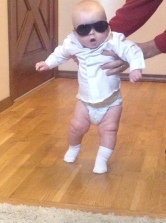