Last Thursday I went back to work. There were many tears involved; mostly mine.

I knew it would be hard to leave Theo, but I actually was proud of myself for only shedding a few tears when I dropped him off the first day. It was nice to see coworkers again and I was actually feeling pretty good about getting back into the swing of things, until I got an email from D, letting me know our daycare provider had called to tell him Theo was refusing the bottle. Suddenly, all the emotions I had been doing a good job at holding back came pouring out. I had to close my door and have a good cry. Why did I have to come back to work? Why do we have to live in such a high cost of living area where we need my income? Why couldn’t I have been born in a different decade where moms were expected to stay home? And since I had no control over any of those things, I blamed myself: why couldn’t we have done a better job getting Theo used to a bottle before starting daycare?

I managed to pull myself together long enough to get through a call, and then I closed my door again and called our daycare provider to check in. She said Theo was doing a little better with the bottle, but I could hear him crying in the background. It broke my heart and I had to have another good cry in my office. Thankfully D was able to leave work early to go get him, and said he gulped down a bottle once he got T home. Who knows why he resisted the bottle so much at daycare – maybe it was just the unfamiliarity of it all – but I was finally able to relax, knowing he was at home with his dad and at least wasn’t hungry anymore. When I got home that night, he nursed for a really long time, and then wanted to eat again about an hour later and got in another long nursing session. He also woke up twice that night to nurse. I’ve heard of babies “reverse cycling” when they start daycare, and I think that might be what he’s doing. So, just when I really need to start getting more sleep, it looks like I may be getting less until T gets used to his new routine.

Thankfully D has a flexible schedule, because he ended up having to pick T up early again the next day. This time, instead of refusing the bottle, he had downed everything I had sent him with by 2 p.m. So we’re still figuring things out, and I need to make sure I’m pumping enough (more about that later). The good news is, dropping him off the second day was ten times easier than it was the first day.

So, yeah… about pumping. Pumping at work will definitely take some getting used to. Aside from carving out time in my day to do this 3-4 times, it’s just plain weird. I texted D on my first day and told him I was topless in my office. His reply: “A raise is a raise. The glass ceiling isn’t going to move itself.” (LOL). I will say, on that first day I was especially thankful to have an office with a door where I can cry and/or go topless as needed. Now there’s an odd sentence!

The good news is that I’ve set some boundaries with work that I think will make being back at work more manageable. While I used to regularly stay past 6 p.m. and not get home until 7:30 or later, I told them I would be leaving at 5 p.m. every day, and would log on again from home if I needed to finish anything up. I’m also going to work from home two days per week. Prior to maternity leave I was already working from home on Tuesdays, so I’ll continue that, and will also have a floating WFH day that I’ll determine on a week-to-week basis, depending on meetings. We’ll still have T in fulltime childcare since I can’t watch a baby and get work done at the same time, but at least I can get 3 hours back in my day by eliminating my long commute.

So, while the first day was pretty rough, I must say I’m feeling much more confident about maintaining a work-life balance. I think I can actually do this whole working mom thing! 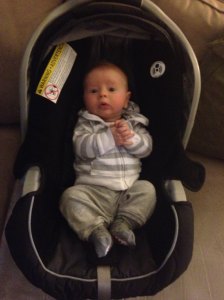 Theo on his first day of “school.”