Can’t believe my baby is one month old! Well, he is actually 6 weeks old. I’m a couple weeks behind on writing this, though the photo was taken June 9, at exactly one month old. I’m officially resolving to blog more often, even if it’s just quick posts/photos. I think the idea of trying to capture everything in a big update is keeping me from writing in a timely manner. It’s just simply too hard to find time to sit down and write a long post, especially since he’s been going through a bit of a fussy period lately. It’s sort of hit or miss as to what kind of a day we’re going to have. When he’s happy, I hate to ignore him, and when he’s fussy, he doesn’t like to be put down. Either way, as soon as he falls asleep I have to decide whether I want to shower, pump, clean, nap or do something for myself. Usually there’s only time to do one before he’s awake again. As of right now he has fallen asleep on the couch and I’m afraid to move or I’ll wake him up. But maybe I can finish the post before he does! 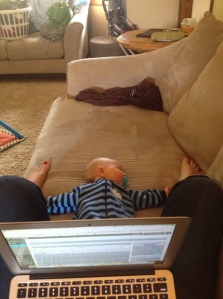 (Side note: it’s now three days later – he only gave me about 20 minutes in the photo above and I’ve only had a few minutes here and there to write since then!)

Sleeping: We’re only getting about 3 hours at a time since he wakes up to eat frequently, but he has gotten to a point where he usually goes down easily at night, and will go right back to sleep after eating. Sometimes we both fall asleep while nursing, since I’ve mastered the side-laying feed. I’ll wake up and realize it’s been over an hour and we’re both snoozing, sometimes with my boob still in his mouth. While it’s helping me to get more sleep at night, it does make me a bit nervous when I fall asleep like that since I’m afraid of smothering him with my giant boobs. He’s sleeping well in his Pack and Play next to our bed and I’m trying to get in the habit of having him nap in his crib during the day, but most of the time he ends up falling asleep on the couch, in our arms, or in his swing.

Eating: He’s eating like a champ. Still gets a bit sleepy at the breast, but will usually make up for a sleepy feed by pigging out at the next feeding. We’re feeding on demand but he tends to eat pretty regularly every 2 hours during the day and every 3 hours at night. He’s given us a couple 4 hour stretches at night and one 5 hour stretch, though. The extra sleep feels awesome, though my boobs feel like they’re going to explode when I wake up.

Personality: It’s fun to see little glimpses of his personality developing, and I’m excited to find out what kind of a person he turns out to be. I think he will probably be pretty chill. He tends to get fussy in the evenings, but he also has been burping and farting a lot lately, so I think a lot of his fussiness is due to gas. Otherwise, he mostly only cries when he needs something – usually a boob or a diaper change. He definitely has days where he’s fussier than others, but I heard the average baby cries for 3 hours a day and he’s nowhere near that. So even on his “bad” days, I know he’s really not that bad. He is really easy to take places, since he tends to sleep great when there’s a lot of noise around him.

Likes: He HATED having his diaper changed for the first couple weeks, but now he loves it. In fact, if he’s fussing, he’ll actually calm down now when you change his diaper and will stare attentively at you while you change him. He likes his pacifier okay, and it will sometimes calm him when he’s fussing, but he won’t always take it, and he tends to spit it out quickly. He really likes his swing and his activity mat, and loves to stare up at the dangling toys. Above all else, he loves the boob. Even when he isn’t hungry, that’s the one surefire way to stop him from crying. Unfortunately, he tends to get a bit frantic and gulp a lot of air while he sucks when he isn’t hungry, which causes more gas, which makes him fussier, so I try to find other ways to calm him if possible when I know he isn’t hungry.

Dislikes: He’s a pretty easy going guy, so there isn’t a lot he doesn’t like at this point. He isn’t afraid of being held by other people, and isn’t even fazed when the dogs bark. About the only thing that really pisses him off is gas. If he needs to burp or fart (or poop), his face goes beet red and he fusses and grunts until he can get some relief. Poor guy. I may ask our pediatrician if there’s anything we can give him to help with the gas. I’ve heard mylicon drops can help but haven’t looked into it enough yet.

Mama: Recovery for me has been a bit rough, and slower than I expected it to be. At 6 weeks postpartum I’ve only recently started to really feel like myself again, though there are some things that are just… different than before. I think I’ve pretty much destroyed all my pelvic floor muscles and those will take a while to rebuild. I’m not loving this postpartum body and I still have about 7 or 8 lbs to go before I’m back to my pre-pregnancy weight. I have my six week checkup with my doctor next Tuesday and I’m hoping she’ll clear me for exercise so I can start getting back in shape. As of right now I’m feeling pretty squishy and weak. I went bathing suit shopping yesterday which was seriously depressing. I knew I would definitely be wearing a one-piece this summer, but I hadn’t realized how hard it would be to find something I’m comfortable in. I did finally find a suit at Nordstrom that was WAY more money than I would have normally spent (usually I can find cute cheap suits at Target or Old Navy). I’m having some pretty serious buyer’s remorse and will probably keep the tags on until I really need to wear it, and keep my eye out for something cheaper before then so I can return it.

Okay, I’m going to wrap this up before Theo wakes up from his nap!