It still doesn’t seem real. Not only that, but my PgAL (pregnant after a loss) brain has worked me into thinking it won’t last.

I (ahem) *may or may not* have taken several pregnancy tests since last Wednesday when we first got that faint positive. The good news is, the line is getting darker each time. 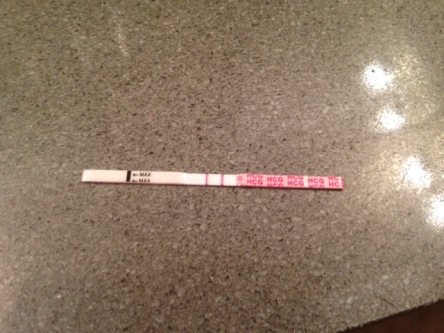 I  know you aren’t supposed to use these tests quantitatively, since the amount of dye can vary from one test to the next, but in theory, the more hCG you have in your system, the darker the line is, so it gives me some small peace of mind to know that my hCG at least appears to still be rising. I know it’s not a reliable method of tracking the progression of the pregnancy, but I’ll take any grains of reassurance I can get at this point.

I had a couple days earlier this week where I felt pretty good. The nausea seemed to subside and I pretty much felt like myself. Great, right? WRONG. So very wrong. The absence of symptoms had me convinced the pregnancy was over. The symptoms seem to have come back these last few days, though. Never thought I’d be so happy to throw up!

29 days until our ultrasound. But who’s counting?